When I started working on analyzing the startup time of a browser, I didn’t have an idea where to start. For me, Performance was a number game and trial-n-error approach. The challenge I was looking into is described in bug 1270977, in which the chrome binary hosted on two different partitions behaved differently.

You can learn more about LaCrOS in my previous blog. From the above table, the difference in filesystem was the first suspect. Squashfs is a compressed read-only file system for Linux.

To emulate the first launch, all caches are cleared using drop_caches as below. echo 3 > /proc/sys/vm/drop_caches

How to measure a file system read time?

For sequential read, B1 took around 92MB/s while B2 took 242MB/s.(Higher read speed means faster). Its a huge difference. ext4 is faster than squashfs.

As Squashfs is a compressed file system, it first uncompresses the data and then performs a read. So definitely it’s going to be slower than ext4 but the difference(242 -92) was huge and unacceptable.

Can we do better?

The next step was to find some tools that could provide more information.

After running this command for both B1 and B2, it appears that B1 is not merging read requests. In other words, rrqm/s and %rrqm values are ZERO. Refer man-iostat

%rrqm The percentage of read requests merged together before being sent to the device.

rrqm/s The number of read requests merged per second that were queued to the device.

The data to be read is scattered in different sectors of a different block. As a result of scattering, the read requests were not merged, so there could be a lot of read requests down to the block device.

Next step was to find out who is responsible for merging read requests.

IO scheduler optimizes disk access requests by merging I/O requests to similar locations on disk. To get the current IO scheduler for a disk-device

For B2, it uses the bfq scheduler

As you can notice, B1 does not have scheduler. For B2, scheduler is bfq(Budget Fair Queueing).

SUSE and IBM has good documentation about IO scheduling.

It has been found so far that there are differences between file systems, read request merge patterns, and IO schedulers. But there is one more difference which we havent noticed yet.

If you look at how B1 is mounted, you will see that we are using a virtual device.

A twist in my story

Read more about a device-mapper and refer to the diagram on wikipedia page.

We are using a dm-verity as a virtual device.

From a security point of view, it makes sense to host your executable binary to a read-only files system that provides integrity checking.

There is a twist in that dm-verity does not have a scheduler, and scheduling is delegated to the scheduler of the underlying block device. The I/O will not be merged at the device-mapper layer, but at an underlying layer. 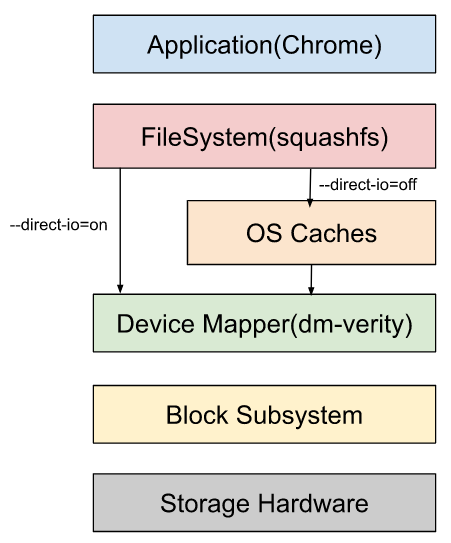 Several layers are different between B1 and B2, including partition encryption(dm-verity) and compression(squashfs).

In addition, we found that B1 defaults to using --direct-io

What is DIRECT IO ?

Direct I/O is a feature of the file system whereby file reads and writes go directly from the applications to the storage device, bypassing the operating system read and write caches.

Although direct I/O can reduce CPU usage, using it typically results in the process taking longer to complete, especially for relatively small requests. This penalty is caused by the fundamental differences between normal cached I/O and direct I/O.

Every direct I/O read causes a synchronous read from the disk; unlike the normal cached I/O policy where the read may be satisfied from the cache. This can result in very poor performance if the data was likely to be in memory under the normal caching policy.

Is it possible to control how many read requests are made?

We decided to go deeper and analyze the block layer. In the block layer the request queue is handled, and I/O scheduling is done. To see how the flow of IO goes through the block layer, there is a suit of tools consisting of

Below is the result of block-level parsing.

D2C time: the average time from when the actual IO was issued to the driver until is completed (completion trace) back to the block IO layer.

--d2c-latencies option: This option instructs btt to generate the D2C latency ﬁle. This file has the ﬁrst column (X values) representing runtime (seconds), while the second column (Y values) shows the actual latency for command at that time (either Q2D, D2C or Q2C). 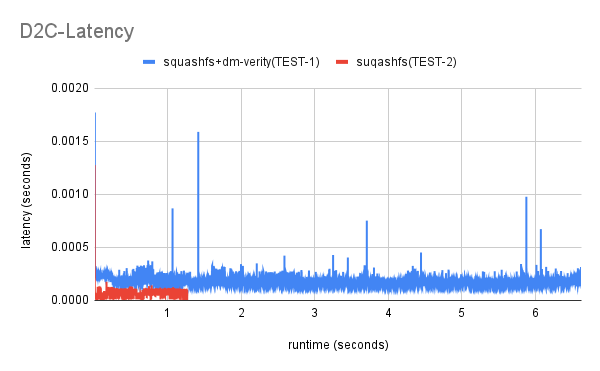 Up until now, all analysis has been performed using a dd which emulate sequential read requests.

Read access pattern also affects a IO performace so to emulated a random IO workloads tools like FIO is useful.

When you specify a --size, FIO creates a file with filename and when you don’ specify it FIO reads form a filename.

We are testing an existing chrome binary without providing its size.

A “hotspot” is a place where the app is spending a lot of time. After performing above analysis, find those areas and speed them up. This is easily done using a profiling tool like It has been found so far that there are differences between file systems, read request merge patterns, and IO schedulers. But there one more difference which we havent noticed yet.

Block is a continuous location on the hard drive where data is stored. In general, FileSystem stores data as a collection of blocks. When the block size is small, the data gets divided into blocks and distributed in more blocks. As more blocks are created, there will be more number of read requests.

Squashfs compresses files, inodes, and directories, and supports block sizes from 4 KiB up to 1 MiB for greater compression.

We experimented with different block sizes of 4K, 64K, 128K, 256K. As the block size is increasing, the read speed for DD is increasing. We have chosen 128K.

This is related to dm-verity. dm-verity decrypt the read request. It uses different hashing algorithms.

The purpose of this blog post is to demonstrate how to identify the hotspot and how to explore different parameters affecting the system’s performance. It was an interesting experience and I learned a lot. By sharing all the details about how the problem was broken down and improved, I hope others can learn something as well. As a result of playing around with the various combinations of parameters such as blocksize, compression, and direct-io, we have decided to go with the following configuration. 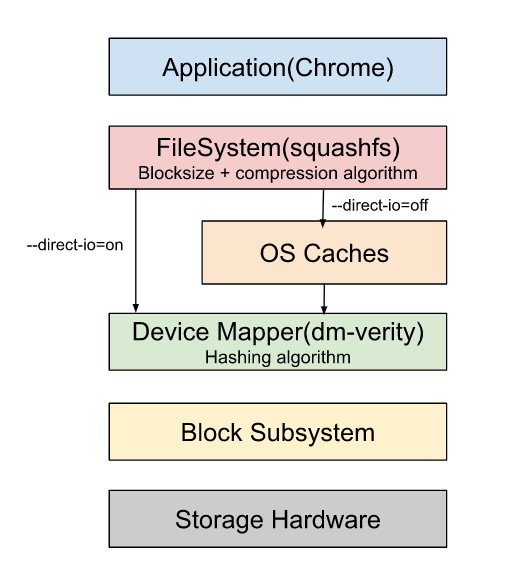 Your first step should be to identify your current stack and then analyze each layer of your file system stack using the available tools and optimize them. The information provided in this blog may be helpful to you in deciding what to do about your own performance issues. You can get it touch with me if you need any help.